The 150-year-old Chateau Bel-Air Lagrave is a Cru Bourgeois which located in the village of Grand-Poujeaux, the central area of Haut-Médoc. They insist on their tradition: respect nature, do not use herbicides and harvest by hand. Its products only 60,000 bottles per year, which is only a “small winery” in Bordeaux. The grape varieties in the winery are 60% Cabernet Sauvignon, 35% Merlot and 5% Petit Verdot. The average age of the vines is 35 years. The wine has a traditional Bordeaux style which is made with Merlot and Cabernet Sauvignon. They are medium- to full-bodied with aromas of black currant, plums, and earthy notes of wet gravel or pencil lead. The tannins are often high enough that wines will age for several decades.

Moulis-en-Médoc  is a small village in the Haut-Medoc district of Bordeaux in south-western France. It is a commune in the wine-producing area of Médoc. The commune produces wine with a great reputation which benefits from the appellation of Moulis, one of the six communal appellations of the Haut-Médoc vineyards.
It gives its name to the Moulis appellation, which covers red wines produced from Cabernet Sauvignon, Cabernet Franc, Merlot, Carmenere, Petit Verdot and Malbec.

The soils around Moulis is mixed with clay and limestone, allowing for the production of high-quality wines. Cabernet Sauvignon, in particular, responds well to the free-draining qualities of gravel soils and produces well-respected wine. 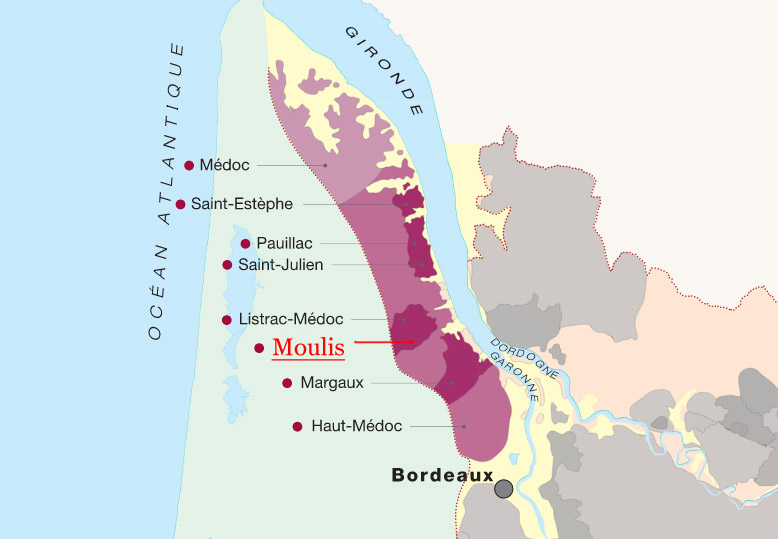 Deep ruby red color, intense and brilliant with garnet shades. A good example of fully mature cru bourgeois from a quality estate, offering mellow aromas of leather and graphite and a smoothly polished palate of jammy red and black forest fruits. it shows a remarkable potential for aging.

Deep ruby red color, intense and brilliant with garnet shades. It offers a seductive and well developed bouquet and harmony on the palate. This wine is a testament to the longevity of wines from this quality estate.